Rome is the Capital City of beautiful Italy and has also quickly become one of Europe’s top destinations to visit. With its stunning architecture, art and history dating back 3,000 years, there is no better place to embrace yourself into a new culture. Rome will be by far, one of the most historic cities you will explore. Rome can easily be split into two halves.

The first half being the Vatican City and St. Peters Square and the second half being the Trevi fountain, the Pantheon, the Basilica, the Colosseum and the Roman Forum. This is always something to consider when deciding where to stay and how to plan your days. Stay tuned because I’m going to give you all the best recommendations and how you can make the most out of your Italian experience!

FUN FACT: Modern Rome has 280 fountains and more than 900 churches.

Who to fly with?

Several airlines will fly directly into Rome, prices ranging from the airline as well as the time of year you are thinking of visiting Italy. Delta and Alitalia are two of the largest airlines flying directly to Rome and are in partnership with Air France and KLM. There are two main airports to fly to in Rome, Fiumicino and Ciampino, both international airports in Italy. If you are coming from the US or Canada, then you will fly into Fiumicino. However, those coming from Europe or elsewhere will have the option between the two airports in Rome. When choosing between the two, Ciampino is the smaller airport and can sometimes be quicker to get through security; however, the con is that this is not an airport for duty-free designer stores!

Deciding on where to stay in Rome can come down to many factors. It is important to look at your preferences and what you are coming to Rome to do as well as your budget when it comes to accommodation. Staying in the heart of Rome’s historical Center is extremely popular amongst Italy’s first-timers because of its convenience. Here, you will be able to travel on foot to many of Rome’s historic sites without needing to take Italy’s public transportation. The only downside is it also tends to be the most expensive of places to stay! Popular areas in Rome’s historic centre include;


FUN FACT: You may see many wild cats can be climbing the walls of the Colosseum, and sleeping among the ruins of the Forum.

When is the best time to visit Rome?

Typically, Spring is the best time to visit Rome for sightseeing and if possible, visiting Italy outside of the Easter weekend is even better! Mid-March to April is the perfect time to see Italy at its best as you’ll be blessed with warm temperatures that are bearable to walk around in and the crowds won’t be at their peak yet! Another great time would be September to November as the summer heat would be out of the way, cooling back down to bearable temperatures. Typically, I would advise not to travel to Rome during August as this is when the tourist population in Italy would be at its highest. If you really want to get that authentic Italian feel, then August may not be the best time to travel to Rome.

How to get around Rome

You’ll be surprised to know that public transport in Rome is cheap and user-friendly! Once you are in Rome, you can take the Metro, Bus, Tram, urban Railway, and Taxi’s to a number of different locations.

Check out Rome Transportation for ticket prices and schedules.

FUN FACT: The Ostia Antica was an abandoned town, buried for over ten centuries until it was discovered.

Get your walking boots on and strap them up tight because you’ll definitely be getting your steps in while in Italy. The places below are unmissable landmarks and only a fraction of what Italy has to offer, some of the most beautiful buildings in the world residing in Rome.

Walking around the city

You can prebook tickets for Colosseum, Roman Forum and Palatine Hill, which are all within a 5-minute walk of each other. The Roma Pass is popular amongst tourists as it gives you access to all three for two days! Queues often take around 15 minutes to get through. I would recommend doing these three sites in the morning, having lunch, and then walking from there to the next destination to spend the afternoon walking the streets and seeing Trevi Fountain, the Pantheon, and the Basilica.

Walking around Rome instead of taking a taxi to each of the sites is something I can’t stress enough! When you turn a corner you honestly never know what ancient building you are going to stumble across without even meaning to! Something you would never have seen in a taxi.

Rome is stunning both day and night. The city has spotlights and lamps scattered around which allows the statues and monuments to be lit up at night. One thing I want to mention is when visiting the tourist attractions, they can get swamped and prone to pickpockets. So keep your bags close to you and no valuable items hanging out your back pockets!

FUN FACT: Every night at the Trevi Fountain about 3,000 Euros are swept up from the bottom of the basin. The money is donated to Caritas, a Catholic charity, who uses the money to provide services for needy families in Rome. 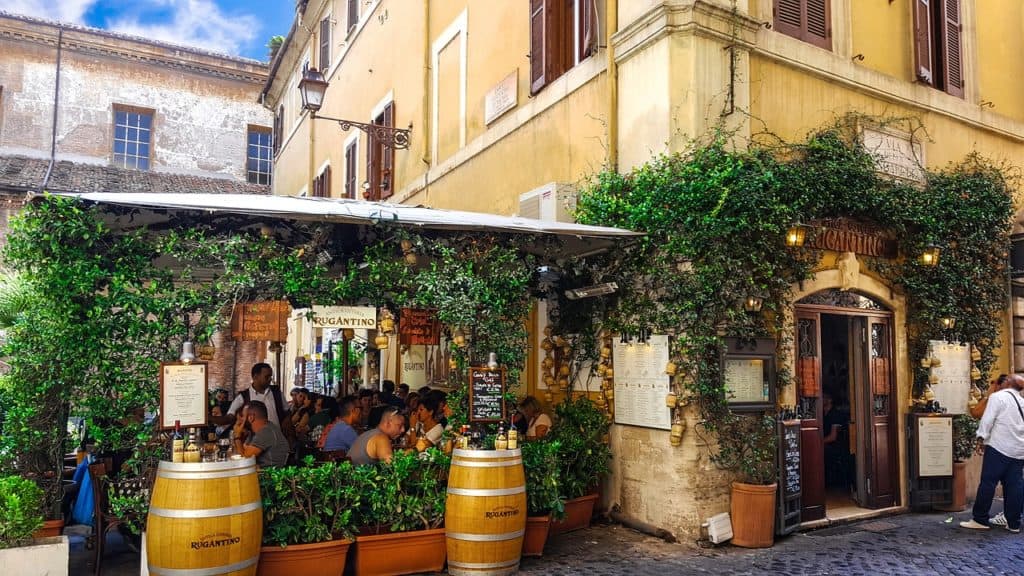 Does anybody go to Italy and not try their pizza or pasta?

If you are by the Pantheon then check out Armando Al Pantheon, an authentic family run restaurant. They sell plenty of fish dishes and vegetarian meals!

For more lunch type foods check out Roscioli which is described as the ‘ultimate Roman deli-restaurant’ in Campo de’ Fiori. A food shop with tables. You can customise your deli to your tastebuds by choosing your fillings at the counter.

But the best area for having dinner in Rome is Trastevere. Here you’ll find many different small Italian restaurants, Trastevere has a typical relaxing vibe. It doesn’t even feel like you’re in one of the busiest cities in the world.

It’s even possible to book a wine tasting tour throughout the Trastevere area.

Dining and relaxation in Trastevere, it feels more like you’re having dinner in a small Italian village.

No trip to Italy is complete without Gelato. My biggest tip is to find somewhere that makes REAL gelato with REAL ingredients. That’s the stuff you’re after! Some amazing homemade gelato stops, with incredible flavours, are; Neve di Latte, Otaleg, Ciuccula, Venchi, Cambiovita, and the Giolitti. 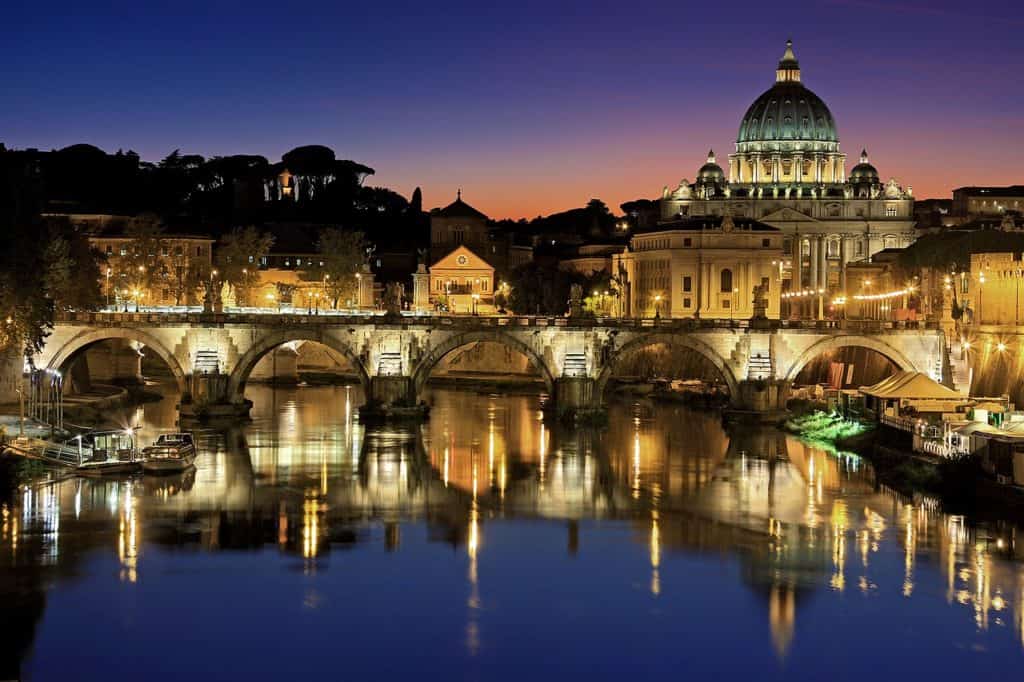 Where do the locals go?

Now we all want to see the touristy stuff when we visit a new City, but then sometimes we forget about the authentic stuff! If you have some spare time on your trip to Rome or this is your second trip to Italy, so you’re looking for something different to do, check out these non-touristy activities.

Getting the best out of your Italian experience

Don’t miss out on…

Saying Hi to the POPE!

The audience with the pope is on Wednesday’s, which is an incredible experience in Rome but very BUSY! The pope will say hello from his window at noon on Sunday, which will usually have a lot fewer people attending if you want to avoid those crowds.

There is a stunning hotel called Residenza Paolo VI which has a rooftop bar overlooking St. Peters Square. Even if you are not staying at the hotel, it is a gorgeous place to pop in for a drink to relax and take in the magnificent views!

FUN FACT: Women in ancient Rome dyed their hair with goat fat and beech wood ashes. Red and blonde were the most popular colors.

If you are heading to Italy, then I wish you the most AMAZING time, and I hope that you found this guide helpful for all the best recommendations. If you have any other suggestions or questions, then please comment below because I would love to hear from you about your own experience and thoughts on Rome!

Léon Kopijn works and lives as a Digital Nomad. He travels the world with the love of his life and writes about inspiring cultures and practical travel tips. Find out more about Léon on his about page!

link to Is It Worth Having A Seasonal Pitch? Pros & Cons Guide

One of the best things about traveling with a camper or caravan is being able to park your home wherever you please. Maybe today you're enjoying the beautiful beaches, and tomorrow you'll explore the...

Continue Reading
link to Can I Live In My Caravan On My Parents' Drive? Full Guide

Living in a caravan is affordable and fun. And if this is something you like doing or thinking about doing, you might wonder, can I live in my caravan on my parent's drive? You can live in your...

We also share our personal stories of escaping "the corporate rat race" and following the path to freedom, love, happiness, and a fulfilled life.